Posted on August 24, 2010 by bicivenetojournal

A SOLDIER OF THE GREAT WAR. For more than 90 years a soldier lay frozen in the ice of the Marmolada glacier.  His loved ones waited and prayed for his safe return but never saw him again, never knew what had become of him, never knew where he had fallen, only that he was out there somewhere, alone and far from home and those who loved him. Then, they too were gone.

Then last Saturday morning Dino De Bernardin, a recuperante (finder of war artifacts) who collaborates with the Great War Museum on Passo Fedaia, was hiking up the glacier to do an inspection. All of a sudden he saw what appeared to be rags emerging from the ice, and went closer to investigate. After a brief check he realized that he was looking at a tattered uniform…and human bones.  He called the authorities and Carabinieri, who obtained the authorization to remove the body. There will undoubtedly be an attempt to determine his identity, and the area will be searched for additional remains. It is hoped that he will be entombed in a military cemetery with full honors. 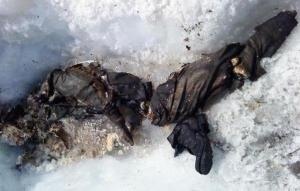 I imagine the soldier as he was in life, when his flesh was warm, blood flowed through his veins, and his lungs breathed the fresh mountain air.  I imagine him as a baby, a child, a youth, wondering what his voice was like, how he moved and smiled, what work he did, what his dreams were, who was the sweetheart he first kissed. I wondered what his last thoughts were as he lay there dying. He was someone’s son, brother, uncle, sweetheart, husband, father, neighbor, friend, just one of many thousands  who perished in this absurd, tragic war.

From the Smithsonian Magazine: The Most Treacherous Battle of World War I Took Place in the Italian Mountains

Visit the Great war Museum on the Marmolada

sites about WWI in the mountains (in Italian)

This entry was posted in History. Bookmark the permalink.