Posted on March 28, 2014 by bicivenetojournal 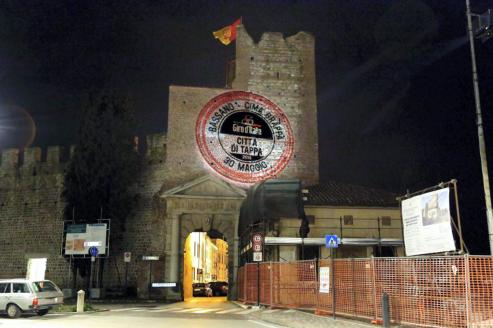 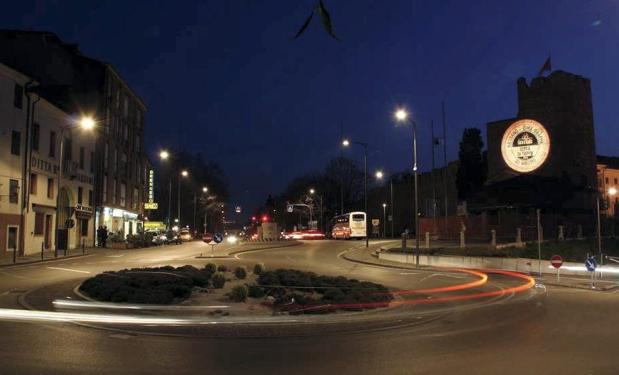 March is drawing to a close, May no longer seems so far away, and signs of the Giro d’Italia’s arrival are appearing in the three Veneto stage cites: Bassano del Grappa, Belluno, and Vittorio Veneto. In Bassano, start of the time trial up Monte Grappa, the official stage city logo is projected each night on the walls of the Torre delle Grazie, one of the most characteristic passages into the city, and through which the riders will pass. A host of related events has been planned to celebrate the race, which locals are calling “a stage that will remain in the history of modern cycling.” The week before, entrants in the Mille Miglia vintage auto rally will cross the Ponte degli Alpini; there will be cycling-related photo exhibits, a non-competitive climb and decent of Monte Grappa on closed roads, and a vintage bike ride (both of which I have signed up for, of course!). The antipasto of the stage itself will be the passage of local legend Simone Temperato, aka Magico Tempe, who will cycle the entire climb of Monte Grappa on one wheel!

Vittorio Veneto has planned music, sporting, and gastronomic events to celebrate the Giro’s arrival. Other initiatives prepared by the the stage committee include a pink fountain, decorated store windows, banners, and the most original and visible: 40 or so pink bikes placed in public gardens, in piazze, on traffic circles, and along city streets.

A local ex-neighborhood leader, proudly demonstrating his ignorance and lack of appreciation for such creative initiatives (especially ones launched by a rival political party, I would suspect), sarcastically proclaimed that the bikes are junk that belong in the dump, and are an embarrassment to the city. He undoubtedly believed that there were plenty of other other dolts like himself who would share his boorish opinion. But he was wrong… 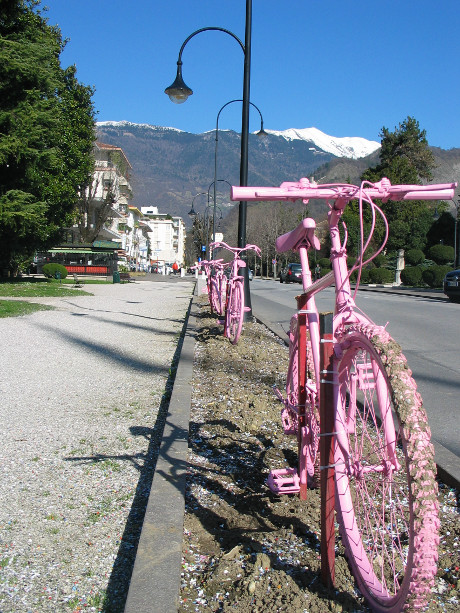 The mayor defended the pink bikes. He was joined by a local art dealer and critic: “Junk? No, works of art,” he affirmed. “Those bikes are not junk, but installations. If you go to the Biennale of Venice [art show], you’ll realize how many artists are creating works using old recycled and destroyed materials. Defining them as something belonging in a junkyard,” he scoffed, “is an indication of crass provincialism.” “Instead,” he continued, “the mayor unconsciously gave form to art works that have entered into the cultural context of pop art…installations of modern art that could be even be autographed by the stage winner, and then auctioned off for charity.”

In the following days, requests for even more of the cheerful pink bikes were made by store owners, agencies, and offices throughout the city. Score one for art! 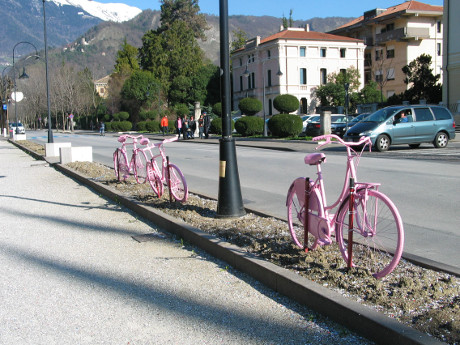 This entry was posted in Giro d'Italia. Bookmark the permalink.