A RIDE THROUGH TIME Part 1

Posted on July 23, 2010 by bicivenetojournal

an imposing tunnel in the Mis Valley

Part 1…Today I had to call on one of my (US) company’s suppliers. It was a beautiful day so you might think I was annoyed about having to make a business trip. On the contrary: the factory is in the Dolomites, and I was actually looking forward to a wonderful drive…and oh…I took my bike along.

After wrapping things up at the factory, I chatted a bit with the two women in the front office. A casual question about their vacation plans led to the discovery that one of them, Mariarosa, was headed toward the family home in a tiny mountain village that lies on the route of one of my favorite rides. She was surprised that I’d heard of it and that I knew exactly where it was. Not far from the village there was once a resort town named California, whose founders had given it a name that they’d hoped would bring good fortune and prosperity (à la the Gold Rush). Its fate, instead, would be quite the opposite. In 1996 the world watched horrified as the river Arno flooded Florence, but many lesser known towns and areas suffered a similar fate. Landslides in the mountains sent boulders, mud, and trees tumbling into Don di Gosaldo, a town high above California, and down in the valley the Gosalda, also swelled by boulders, became a raging torrent and overflowed its banks. Don was severely damaged; California was destroyed. Don was rebuilt. California is a ghost town. When I told Mariarosa that my friends and I had gone to see it, she told me she’d been there many times when it was in its heyday, and described how attractive, lively, and happy it had been. A bus line brought tourists to the bustling hotel, and young people flocked to the dance hall.  If we had found it to be a sad and haunting place, I could only imagine how heart wrenching it must be for someone who had so many happy memories there (click on California in the navigation menu).

After listening to her enthusiastic and heartfelt account, I knew that my ride today would have to be in the Mis Valley, where the road passes not far from California (you can only go there on foot). I drove up the Cordevole valley, parked in front of an 800-year-old ex-hospice (now an HQ of the forest service), changed into my kit, and set off. I crossed the river on a swaying, oscillating suspension bridge, headed up a one-lane road that leads to a tiny hamlet where my husband and I were once accosted by a deranged parrot, passed yet another hospice, this one 650 years old and inhabited by cloistered nuns, and soon after reached the entrance to the valley.

A cyclist not familiar with the valley would probably be inclined to turn around and go back where he came from. The first section of road, along the west side of the lake (formed by a dam across the Mis), passes through nine forbidding, unlit tunnels, some with sketchy pavement, most with water dripping from the ceiling and forming puddles on the road. The most fascinating part of the ride is along the east side, through a gorge and five more tunnels with a savage and frightening aspect. All along the way, you’re accompanied by the music of rushing streams, and waterfalls tumbling into the Mis. The wind rustles the branches of trees and bushes. There are no other sounds. Cliffs tower overhead, and there’s always the possibility of falling rocks. There are few cars and fewer cyclists, and it can be a lonely, even disquieting and ominous place, for those who don’t feel at home in a place where there are few signs of human habitation, and the ones that you do see were damaged in the ’66 flood and abandoned. The road itself remained closed until 1995.

Just before one of the narrow tunnels there’s a spot which offers a fascinating view of the gorge, and I stopped there to enjoy it and take photos. A few cars passed by and their passengers looked at me with curiosity. You can’t really see the view from a car, so I pointed to the gorge and held up my hand to signal stop! And they did! One young couple got out of their car and walked over to where I was standing. There were tourists from Bologna. “Is this the Cordevole?” the man asked. “No,” I replied, “the Mis. The Cordevole runs down the main valley on the other side of these mountains.” “Oh yes, of course, the valley we just came from,” he said. I was impressed that he’d learned some local geography, which I considered a sign of respect. Sensing his interest, I told him that the peaks towering above us were I Monti del Sole–the Mountains of the Sun–and that in spite of their cheerful name, they are anything but!  Wild, austere, and in some places impenetrable, they are traversed by few trails, some of which, the viaz, are hair-raising chamois routes along narrow ledges, where a slip will cost you your life.

Then I told the young couple the story of California, to which they listened with great interest. So much, in fact, that they asked me how to get there, then got in their car, turned around, and headed back up the valley. I was pleased that the tale had had such an effect on them, and that they were so interested in this territory. 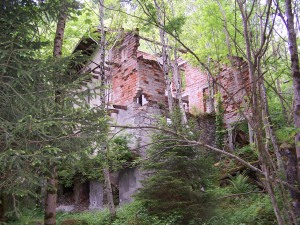 this was once a hub of activity

This entry was posted in Places. Bookmark the permalink.