Posted on July 4, 2010 by bicivenetojournal 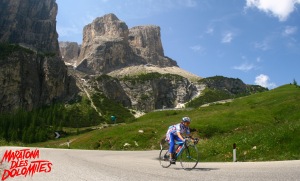 It’s 4:30 a.m. and still dark in the shadows of the mountains. All along the Val Badia and adjacent valleys, alarm clocks are ringing and lights are going on. Maratona day has begun. I open the shutters of my hotel room balcony and peer out at the imposing black silhouettes towering around me in every direction. As the water boils for my coffee, I dress in my cycling kit, carefully laid out the night before, with my race number already pinned on my jersey. I eat breakfast, carry my bike and gear to my car, put my bike on my roof rack, and get under way. From my hotel on the top of Passo Campolongo, I drive down to Corvara in Badia, where the event finishes, and park, as usual, in the lot in front of the church. I ready my bike, put on my helmet and shoes, and head up the valley towards the start in La Villa. It’s not yet light and it’s still cold; I’m wearing a Windtex winter jacket, mid-weight knicker tights, long-fingered gloves, and shoe covers.

Twenty-five thousand cyclists applied last fall to ride in the 2010 Maratona. This morning, the fortunate 8,798 riders from 42 nations who were chosen by lottery are all converging on the start area (8,640 will finish). Seven hundred thirty-five of us are women. I’ve asked myself why I do it. Between the registration fee, hotel room, meals, and diesel fuel, I will wind up spending quite a bit. I live near the Dolomites and can drive up to do the Sella Ronda, the Giau, and Falzarego passes any time I want, for free. But it’s not the same…

Nothing can prepare you for the emotion of standing in the starting grid at 6:15, helicopters flying overhead, Rai (Italian national tv network) cameras at the ready, music and announcements booming from the loud speakers, a priest blessing us all…young and old, riding sleek road bikes, clunky touring bikes, adaptive bikes and hand bikes, speaking myriad languages, wearing bright jerseys of every hue…each of us with this Maratona dream that has spurred us on through frigid winter months, fatigue, and the trials and stresses of everyday life. At the head of the pack, wearing his usual foulard and riding his highwheeler, is the whimsical Michil Costa, head of the organizing committee and creative force behind many of the event’s unique, poetic, touches (who else would think of dedicating an edition of the Maratona to angels?). With him is beloved author/sculptor/alpinist Mauro Corona, wearing his usual bandana and riding a mountain bike.

The start is given, and we’re off! I’ve already noticed one thing: it’s warmer than it was the five previous times I rode the Maratona, when temperatures at the start were in the 40’s. So when we pass through Corvara, I stop at my car, remove the vest, gloves, and shoe covers, and toss them in the trunk, keeping only my arm warmers and the jacket for the descents. The first climb, Passo Campolongo, starts right in Corvara, and although I’ve been riding slowly, I’m not yet warmed up and feel terrible as usual: weak, lightheaded, disoriented. I finally make it to the top of the pass, where my friend Bobbie greets me as I stop to put on my jacket. Then it’s down to Arabba, where the climb of Passo Pordoi begins. I feel fine on this climb, and will continue to do so for the rest of the day. I take it easy, experience no doubts, difficulties, or momenti di crisi, and actually enjoy myself. That is enough for me to consider it a success, and to declare the end of my Maratona jinx.

The descent of the Pordoi is wonderful and dreamlike, especially the lower part where it winds through forests at the foot of the immense gray and tawny peaks of the Sella Group. The climb of the Sella Pass pushes a lot of riders to their limits, but the summit rewards them with spectacular views of the glacier-covered Marmolada and the Sassolungo group: Sasso Piatto, Cinque Dita, and Sassolungo itself. The fascinating aspect of the Gardena pass is that you ride along the very base of the vertical cliffs. The descent to Corvara never seems to end. This is the first time I’ve done it without a jacket.

After taking a shower, I enjoy the abundant lunch given to all the competitors, many of whom are still dressed in their kits–if you ride to the start from an out-of-town hotel, you don’t have much choice. The other problem with that scenario is that these riders also have to ride back to their hotels, which may involve yet more climbing. As I drove back up the pass, I passed a number of them. One looked in pretty bad shape and I wanted to offer him a ride, but there was no place to pull over. I soon came upon another rider who looked to be at his limit, and this time I was able to stop and offer him a ride. Was he ever relieved and grateful! It turned out he was Belgian, and had recently been to Eddy Merckx’s birthday party. He was staying in the hotel next to mine. He waved and shouted to his wife as we passed her (she had ridden the short course and still had some energy to spare) and she replied by giving him the finger.

After carrying my bike and gear up to my room, I decided to go back and see if I could find that first desperate rider I’d seen; at the pace he was going, he couldn’t have gone very far. I never did find him, but just where the road goes into a series of tight switchbacks and drops down into Corvara, I saw a young couple getting off their bikes and starting to walk. I turned around, pulled over, got out of the car, and waited for them to come abreast. “Speak English?” I asked. “A little,” replied the man. “Would you like a ride?” I asked, motioning to my roof rack and gesturing towards to top of the pass. “How much?” he asked. “Nicht! Freund” (Nothing! Friend!), I replied, shaking my head and smiling, hoping the few German words I know would convey my meaning. He understood and explained my offer to his companion, who happily agreed to go with me. I asked where their hotel was: Arabba, on the other side of the pass. They would have had to walk all the way to the top. I can’t imagine how long it would have taken them to walk all that distance, in cycling shoes no less. He had enough energy to keep riding, and I explained that I’d drop off his girlfriend (? wife?) at the top of the pass.

After doing these little good deeds I felt quite content and in the spirit of the Maratona, which not only promotes friendship between cyclists of all nations, but donates part of its proceeds to humanitarian projects such as digging wells in Africa.

This entry was posted in Gran Fondo. Bookmark the permalink.