Posted on September 17, 2008 by bicivenetojournal

THE HOSTELRY WITHOUT A HOST. My friend Marisa showed me an article about it that she’d clipped from the local paper, and we were immediately intrigued–it sounded like just our kind of place! She and her husband Silvano are my companions in adventure, always ready and willing to dash off in search of quaint towns, enchanting footpaths, fascinating natural phenomena, old-fashioned festivals, and other delights. On this particular day we began our wanderings with a visit to Isola dei Morti, the Isle of the Dead, so-called because during the fierce battles of World War I,  it was filled with the bodies of fallen soldiers carried there by the river Piave. It is now a park dedicated to the memory of the Arditi, the fierce, courageous assault troops who played a pivotal role in the final operations of the war.

When we returned to the car, Marisa, with a gleam in her eye, said, “Now let’s go find the tavern without a host!” We knew only the name of the town where it’s located; the article had provided neither the street name nor directions. The omission was intentional. Finding it, we discovered, is part of the fun–a kind of treasure hunt. We headed north into the Prosecco wine area, traversing the steep, winding, vineyard-lined roads that I usually travel by bike. Upon entering the town, we spotted a woman chatting with friends at her front gate, and stopped to ask directions. It was not far away, and a couple of minutes later we were heading down a narrow lane flanked by grapevines. At a certain point it was intersected by an unpaved road, and we spotted a small sign that read, “Dov’è l’oste?”…”Where is the host?” We laughed with delight, now caught up in the spirit of the game, and following the arrow, turned left. The road ended at a winery, but a small path went up a hill on the right. Next to it was a sign reading, “Non c’è l’oste”…”There is no host.” Aha! 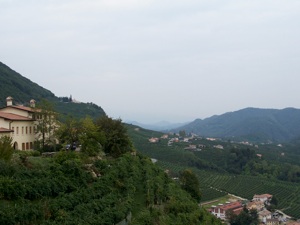 the view from the osteria

We parked and walked up the path, enchanted by what we found: the rustic, inviting osteria, and an enthralling panorama of the surrounding hills. We entered the cozy structure and found several small tables with paper place mats, packages of cheese, salami, and freshly-baked bread, a basket of hard-boiled eggs, a coffee machine, and a refrigerator stocked with Prosecco. The concept of the Osteria Senza Oste is simple and charming: you help yourself, calculate how much you owe, and deposit your “donation” in a locked wooden box on the table next to the door (the prices are the same as those you’d pay in a supermarket). Before leaving, you clean your table, lay out fresh place mats, sweep up the crumbs, and place your used glasses in the specified spot.  We happily helped ourselves to the offerings, polishing off a bottle of cold, crisp, delicious Cartizze in no time at all.

a simple lunch in cozy surroundings

The owner of the Osteria Senza Oste, Cesare Di Stefani, didn’t start out with this concept. The owner of a salami company, he opened the little place (stocked with his own products) for locals and friends, with normal table service, but limited hours of operation. Everyone loved it, but they were always telling him that they wished it could be open more. Having his own business made it impossible for him be there all the time, so he came up with the original idea (it’s the only place like it in Italy) of letting customers serve themselves and pay on the honor system. Friends told him he was crazy, but he declares that people have been honest and he has not lost money.

The thought that in this day and age an establishment can be successful without mass media advertising, a website complete with Google map, or even signage, but primarily just by word-of-mouth, is astounding, and heartwarming for the traditionalists among us. The  intentional lack of directions has also ensured that only those who really want to find it will show up: visitors who will delight in its rustic simplicity and cherish its old-fashioned charm, as opposed to the merely curious, boorish, or blasé. Alas, however, Rai television did a piece on it, and it may be becoming too successful for its own good. I just read on a local internet forum that a recent visitor was dismayed to find it crowded with outsiders who’d arrived in luxury cars and giant SUVs…arrgh!

EPILOGUE:  In 2011 authorities attempted to shut down the Osteria, saying that it lacked an operating license, health inspection certificate, and so on. The owner’s reply? “How can you close down a place that was never open?”

There is, alas, no more secrecy about its whereabouts. It even has its own website, complete with Google Map.

This entry was posted in Experiences, Places. Bookmark the permalink.